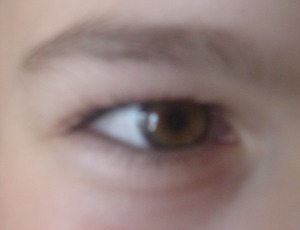 Such a short word! And such a long history, perhaps to make up for its abruptness!

Its story in English starts in around 1200, where it can be found in the Old English forms ege and eage. These came from Proto-Germanic *augon, and examples of cognates that testify to this form can be seen in several other languages: German Auge, Swedish öga, Danish øje, Dutch oog. *Augon developed from Proto-Germanic *agwian, “to see”.

Taking it back one step further in time, we can trace the word to Proto-Indo-European root *okw- meaning “to see”. This root has stood the test of time and given rise to a whole host of words in a number of languages, such as Armenian աչք (achk), Bulgarian око (oko), Polish oko, Slovene oko, Italian occhio, Spanish ojo, French oeil, Greek οπή (opi) all meaning “eye”, and Greek όψη (opsi), meaning “view, aspect”.